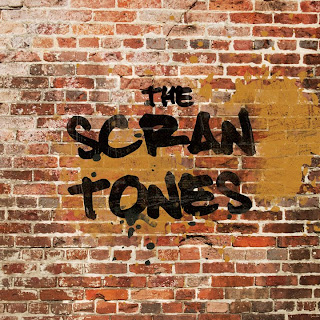 My friend Greg Daniels, the producer of the American version of THE OFFICE, played Jay Ferguson’s demo of what would become the show’s theme for me one afternoon before the series had sarted. I thought it was fantastic, far better than anything I’d given him from ‘my own pen’ that I had hopes for. We both agreed that while Jay’s demo had a really nice, whimsical quality, the recording could be more fully realized.

Greg asked if I had any ideas that might make more of Jay’s theme. I got my friends Dillon O’Brian (piano, organ, accordion, theremin), Brian Macleod (drums), and Hal Cragin (bass) together, and we met at the Record Plant in Hollywood to record the theme. That’s me on the guitar, by the way. Oh yeah, we were in the studio on a Thursday night, one week before the air-date of the premiere episode.

Not long after that, Hal, Dillon, Jimmy Paxson and I appeared in the BOOZE CRUISE episode. It was on that boat that we became THE SCRANTONES.

We’re all pretty busy doing what we need to do to make a living, but we love the idea of the Scrantones despite the fact that there is little evidence of the band anywhere outside of our imaginations. We did actually come to life in Scranton, during the cold month of October, 2007, making a heroic stand at the Catholic Youth Center!

Here is a little something that people have been asking us to give them for a very long time.

The Office Theme (long version
Posted by The Magic Kitchen at 3:38 PM

Thanks for the background behind that song! I am a big fan of the use of music to convey the right mood and emotion in video. It seems to me that you are quite the master of this! I loved your efforts on SOA season 1, and cannot wait to see how season 2 turns out. I will be following the music as close as I do the story. Good luck, and thanks for the great entertainment!

Oh, I love it! It's going on my iPod so I can rock out to it super loud while I'm stuck at red lights. :D

Thanks for sharing this with the rest of us. :D

Just before the final "Buh Buh!", there's a perfect interval where you can shout, "Thank you Scranton, Good night!!" Awesome, thanks for sharing!

Thank you so much for all you've done for "The Office." I love the theme song and am thrilled to hear this long version. Awesome!

Found your blog through the Officetally website. Just wanted to say there's something magical about the theme song from "The Office." I have sort of a Pavlovian response when I hear it - it just makes me smile! And the ringtone version I have on my cell phone...well, it's only assigned to special people, because it makes me happy to hear that ring when they call.

Where's the bridge? I was kinda hoping for a bridge.

Also, is the sort-of quote from "Theme from an Imaginary Western" deliberate, or is this a "My Swet Lord/He's So Fine" kind of thing?

Thanks a lot!
It's nice to hear more than 30 seconds of The Office theme :)

But, if it is not asking for too much, a little better quality would be nice! Just 128kbps mp3 is too bad!

I love my kitchen,when i bought my house through costa rica homes for sale i expected to have a big kitchen and now i am really happy.

Well this is a huge shot in the dark, but would you be able to point me in the direction of getting permission to use this song? ;) It's for... ehm... a Dish Network contest to watch 15 hours of The Office in 9 days. You submit a video to prove you're the "biggest fan", so I figured using the classic theme would be a nice touch. Didn't want to just steal it but I can't find official request forms anywhere on the interwebs. ;) Also, thanks for sharing the insight! Super cool thing y'all did! :)

I'm curious if the choice to use an accordion for the melody was inspired by the polka roots of Scranton? The Pennsylvania Polka was created there!